I haven’t done one of these in a while, so here goes.

On Nov. 1 I was sitting watching TV while the boys napped. Scrolling through Facebook most friends were sharing photos of their kids on Halloween. I had done the same. My ears perked when I heard jingle bells ringing on a commercial for some store. Seriously, I thought. Halloween was JUST yesterday.

Later in the evening we were watching a football game, and the same commercial I had watched earlier in the day was on, and I made the comment rather sarcastically, “And so it starts..” What starts? My husband asked. The barrage of Christmas commercials. “Oh you’re annoyed by everything,” he said. I rolled my eyes and shook my head at him.

As a kid I don’t remember being barraged by Christmas. I do remember the excited girls who marked pages in the JC Penney and Sears catalogs with the items they wanted. I do remember participating and going to practice for the annual Christmas Eve program at church (I was always an angel). I do remember bundling up for the ride to Grandma and Grandpa Wetzel’s for a day of packages, food and fun on Christmas day. There was no telling what could happen when all my mom’s siblings got together for a day. I remember one impromptu snowball fight that ended up in wet clothes and a lot of laughter.

Now that I have kids of my own I try to make their Christmas experiences memorable. Last year we took Shaun around to look at the lights and he still asks if we could go drive through those neighborhoods in town to see the decorations. At the little country church we attend on Christmas Eve, members circle the church at the end of the service and hold candles while singing Silent Night. Last Sunday at church Shaun asked if we could blow out the candles again. I told him at Christmas time we will.

It’s really not about the packages or the commercialization of the holiday. The point of Christmas is to remember the real reason it is celebrated, and to spend time with friends and family.

The aftermath of Christmas 2013 at our house.

I have a slight addiction to Pinterest (hence my 34 boards with 2,292 pins). I love looking on there for ideas for upcoming birthdays, holidays, meals, gifts, etc. It can also give unfulfilled expectations, but can also help make life events pretty special.

My parents have been asking my son what he wanted to be for Halloween. At 2 and a half he hasn’t quite grasped the concept yet, but he knows what candy is. He stayed the weekend with his other grandma (his words, not mine) while we went to the Oklahoma State/TCU football game. When we picked him up she said he kept telling her he wanted to be a dragon for Halloween. So I cruised through Pinterest and found a dragon tail to sew and a picture showing spikes added to a hoodie for the top half of the costume. Seemed easy enough, so I made my supply list and headed out at lunch time a few days the week of Halloween to get what i needed.

First problem, shopping choices in this town are limited. Looking for a plain, solid colored hoodie was almost impossible. Thrift store had nothing, craft store the same outcome. Dollar store nada. So i was left with Wal-Mart. There I found a solid black zip up hoodie. It was fleece, and not really the color I wanted, but I had to make it work since Halloween was only a couple of days away. Plus my son already had black sweat pants to go with the tail and hoodie.

The tail sewed up rather easily and I had no qualms about the hoodie being difficult. Placing and pinning the spikes on the hoodie was a challenge, but I made it work. Not a perfectly sewn masterpiece, but I don’t think my 2-year-old is going to tell anyone. However, when I got to sewing the hood, I lost my patience. My machine wouldn’t sew and I was getting frustrated. Eventually I found I needed to adjust my thread tension and slow down. Not the prettiest thing, but it was finished.

My son was eating his supper when I finished the costume and while I was sewing he had repeatedly came in to check on me. When I finally came out of the office/sewing room carrying his costume he was ecstatic. If he could have jumped out of the high chair, I think he would have. He wanted to try on his costume immediately. I obliged and was pretty happy that he was as happy as it was. As much as I was frustrated, it melted away when he asked, “Is that my dragon costume? I like it!!” 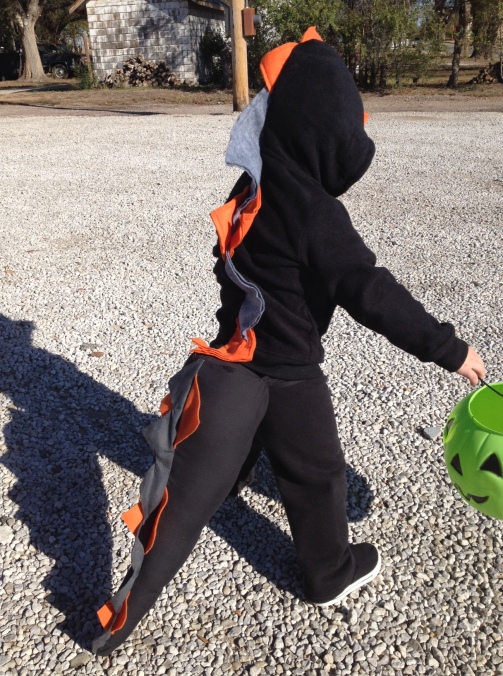 The cowboy and the dragon ready to trick or treat.